A subanalysis of the FIDELITY trial showed finerenone reduced risk for all-cause and CV mortality, including sudden cardiac death, compared with placebo in adults with type 2 diabetes and chronic kidney disease.

The beneficial effect of finerenone (Kerendia, Bayer), a selective nonsteroidal mineralocorticoid receptor antagonist, was consistent in trial participants across the spectrum of both baseline estimated glomerular filtration rate and urinary albumin-to-creatinine ratio; however, the reduction in risk was more pronounced in those with a higher eGFR at baseline, according to Gerasimos Filippatos, MD, DHC, FESC, FHFA, FHFSA, professor of cardiology at the National and Kapodistrian University of Athens in Greece.

“Earlier initiation of finerenone may maximize its protective effects in patients with type 2 diabetes and CKD,” Filippatos said during a press conference at the European Society of Cardiology Congress.

Adults with type 2 diabetes and CKD have a life expectancy that is on average 16 years shorter vs. those without the two diseases, Filippatos said, noting most deaths are attributable to CVD. 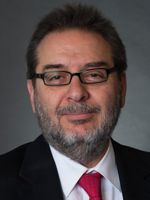 “We need more information about the mode of death in these patients,” Filippatos said.

FIDELITY is a pooled analysis of data from the FIDELIO-DKD and FIGARO-DKD trials, which previously showed finerenone significantly improved CV outcomes and slowed CKD progression in participants with CKD and type 2 diabetes.

The FIDELITY analysis includes a broad spectrum of more than 13,000 patients with type 2 diabetes and CKD, reflecting real-world practice and “higher analytic precision” than FIDELIO-DKD or FIGARO-DKD alone, Filippatos previously said. Median follow-up was 3 years; mean age of participants was 65 years and 69.8% were men.

For this prespecified, exploratory analysis, researchers assessed causes of death in participants of the two trials. Key outcomes were all-cause mortality and CV mortality, defined as sudden cardiac death and mortality due to MI, HF, stroke or CV procedures or mortality from other CV causes.

However, researchers did see a benefit for sudden cardiac death among participants assigned finerenone, with an HR of 0.75 that reached statistical significance (95% CI, 0.57-0.996; P = .046) compared with placebo.

“In this FIDELITY analysis, finerenone demonstrated on-treatment reduction in all-cause and CV mortality vs. placebo and lowered risk for sudden cardiac death, and this was consistent across baseline [levels of] eGFR and [urinary albumin to creatinine ratio],” Filippatos said.

Filippatos said more data are needed to explore the drivers behind sudden cardiac death seen in the analysis and what more can be done to reduce risk.

“These are patients with preserved cardiac function with no history of arrythmia,” he said.