The 13th annual Advanced Technologies and Treatments in Diabetes (ATTD) conference brought together many great minds in diabetes in Madrid, Spain.

With nearly 3,800 attendees from more than 81 countries, ATTD continues to grow dramatically; while it has been since the start in Prague in 2008 one of the most impactful meetings in diabetes, it is now considered one of the top three in the world.

Why? It shows the powerful momentum behind diabetes technology in so many respects, from CGM and BGM to automated insulin delivery (AID) to smart pens to new therapies to new learnings in behavioral medicine. Here are some of diaTribe’s key highlights from the conference – we’ve focused in this report on learnings about CGM and the closed loop. 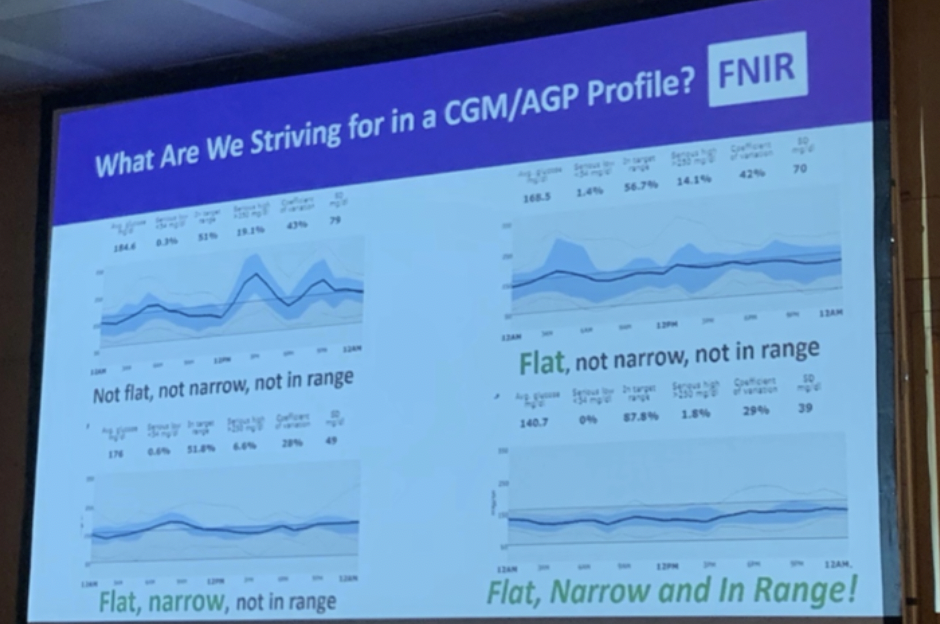 2. Data shows use of CGM features is linked to increased time in range

Dexcom presented real-world data from G6 CGM users showing that people who were most engaged with G6 features (such as alerts, the share-follow platform, and Dexcom Clarity) showed significant improvements in their blood glucose management. These highly-engaged users had the highest time in range and spent 38% less time each day in hypoglycemia (pictured right).

Here are the G6 features that Dexcom highlighted:

Dexcom announced European approval (formally called the “CE Mark”) for its G6 CGM for use during pregnancy for women living with type 1, type 2, or gestational diabetes. This is so exciting! The official “label” is set to launch in spring of 2020.

While no CGM is yet approved for pregnant women in the US (though many are using it off-label), the European announcement should help to increase awareness and education around the world. Every pregnant woman in the world with diabetes or pre-diabetes should have CGM in the opinion of many experts (virtually all the ones we know).

Experts believe that even these encouraging results underestimate the impact of CGM on positive health outcomes for pregnant women and their children. Broadly speaking, pregnancy can cause multiple challenges to diabetes management that CGM can help ease. Pregnant women experience more blood glucose variability with increased insulin resistance and are at a greater risk of hypoglycemia. Learn more here about gestational diabetes.

New users (people in the study who had never used this closed-loop system before) showed:

It is important to note that people in the study were classified as having “well-managed” diabetes at the start of the study, meaning they had relatively low A1Cs (6.8% baseline) and were close to meeting time in range goals, and came from high education levels and socioeconomic status backgrounds. This underscores the need to improve access to closed-loop systems for broader groups of people with diabetes.

Looking ahead, the study will end on March 31, 2020 and all participants will complete a six-month follow-up, so full results will not be available until later this year.

The WISDM study examined the impact of continuous glucose monitor (CGM) use in people with type 1 diabetes above the age of 60. Participants used either the Dexcom G5 CGM or standard blood glucose meters (BGM). After six months, the CGM group spent less time in hypoglycemia (with blood glucose below 70 mg/dl) and two more hours per day in-range (70-180 mg/dl), compared to the BGM group. There was also a greater A1C reduction in the CGM group (0.3% decrease compared to no change in the BGM group). Importantly, people using CGM reported significantly fewer severe hypoglycemia events (defined as requiring assistance of another person). These benefits were seen whether people were using insulin pumps or multiple daily injections (MDI).

For the next six months of the study, the individuals using standard blood glucose meters switched over to CGM. New data shows that the people who switched to CGM spent significantly less time in hypoglycemia and more time in range. The CGM-only group maintained the outcomes from the six-month mark, which was also positive to see.

The WISDM study continues to show that CGM is as important, desired, and effective for older adults as it is for younger adults. Indeed, participants who used CGM in this study reported using it 95% of the time. As CGM becomes easier to use and more affordable in the coming years, we look for this valuable technology to be adopted by more people of all ages and backgrounds. That can’t come soon enough!

Dr. Ramzi Ajjan of University of Leeds presented data across many countries and regions showing that more FreeStyle Libre scans each day was associated with reduced time in both hyperglycemia (high blood sugar) and hypoglycemia (low blood sugar).

Unlike traditional CGM, FreeStyle Libre does not continuously send real-time glucose data to the reader; instead, the sensor patch must be “scanned” with the reader to get the real-time glucose value, trend arrow, and trend graph. By scanning more frequently, people are viewing their blood sugar data in real-time more often. This allows them to make adjustments to avoid highs and lows, whether by introducing a new habit or working to change a longstanding behavior. 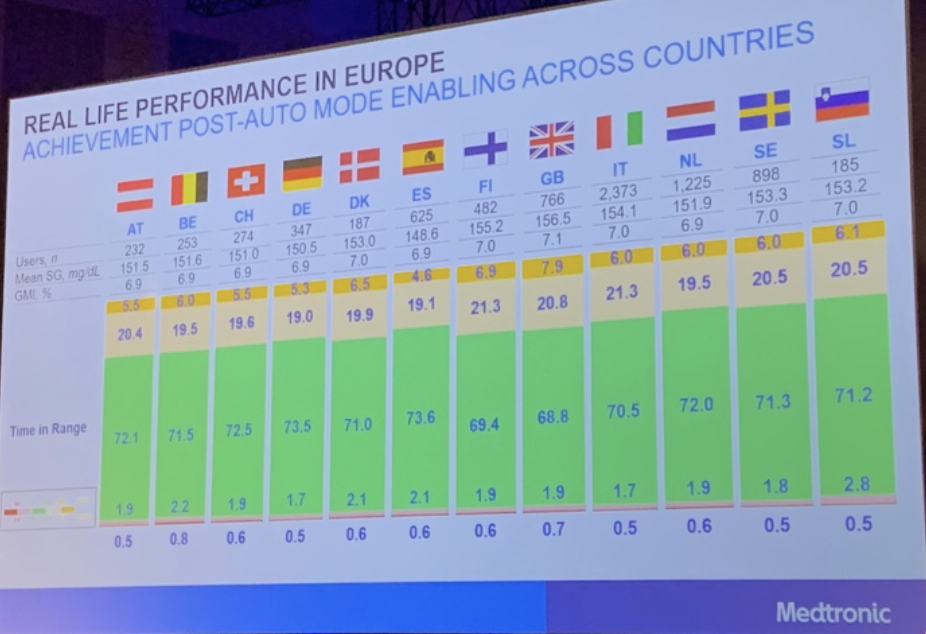 Medtronic presented data from 7,847 people with diabetes across Europe who used the Auto Mode function of Medtronic’s MiniMed 670G AID system. Among 3,139 670G users, average time in range increased from 62% to 71% before and after using Auto Mode – that’s 2.3 hours more time in-range each day! 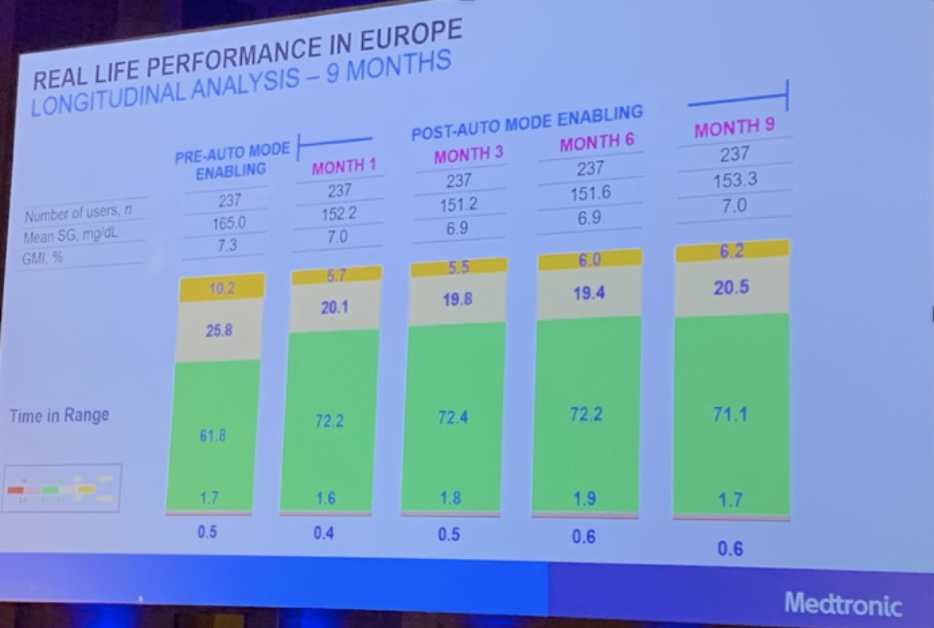 Dr. R. Paul Wadwa of the Barbara Davis Center for Diabetes presented highly anticipated results from the DCLP-5 trial of Control-IQ in children ages 6-13 years old. Over 16 weeks, time in range increased from:

This means that the children using Control-IQ spent about two and a half more hours each day in their target blood sugar range, compared to the kids using a standard pump and CGM.

Dr. Boris Kovatchev from the University of Virginia gave a more detailed comparison of the adult and child Control-IQ trials in the slide below: 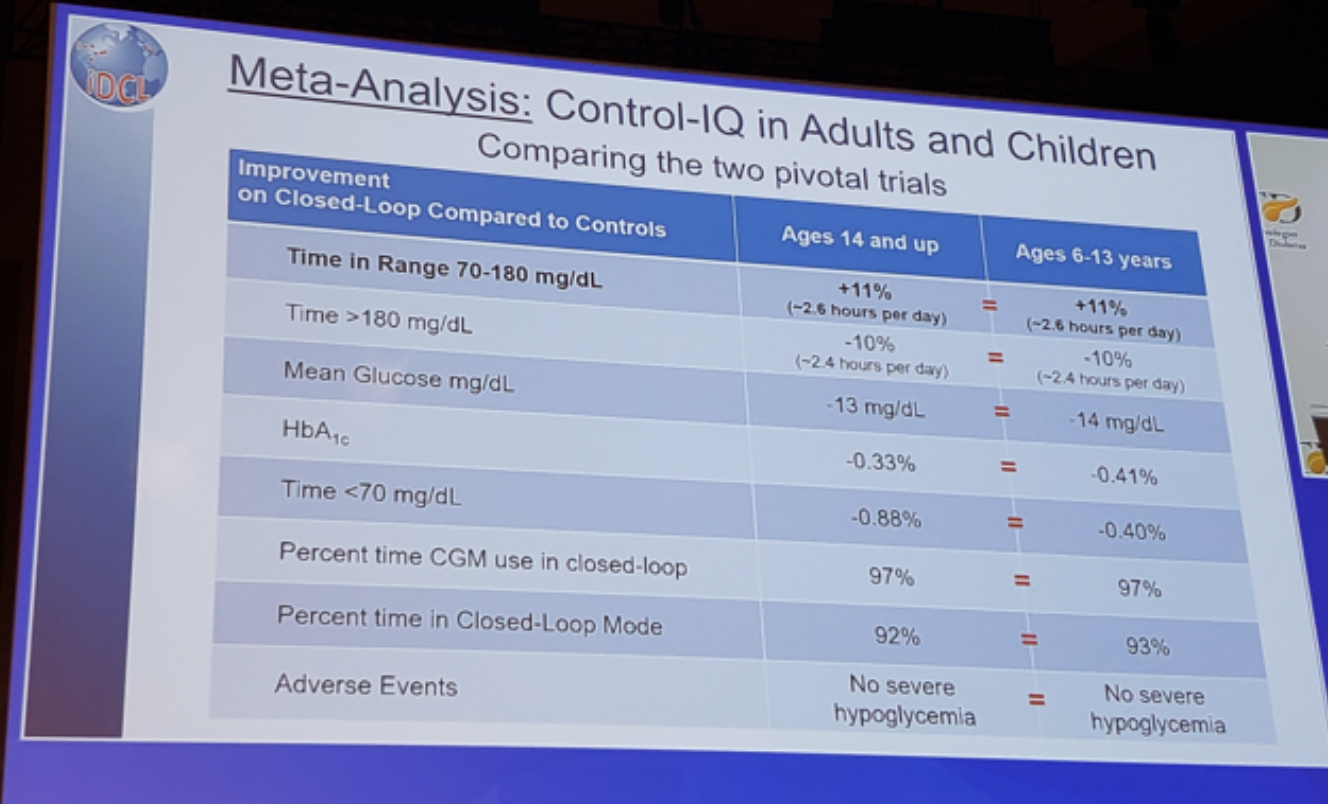 Control-IQ was cleared in December for people ages 14 years and older. Control-IQ is expected to be submitted for approval in children in early 2020.

Thank you so much to the conference organizers Professors Moshe Philip and Tadej Battelino – what an outstanding gathering, and much appreciation for making so many people with diabetes and advocates feel so welcome.

You can see so much more on the ATTD Facebook homepage, including the compelling opening ceremony with keynote speaker Dr. Jay Skyler giving a moving talk about technology past and present, as well as a video of talented Spanish musicians and dancers to close out the first night! The live stream was also much appreciated.

Thank you so much to technology watcher Albert Cai and his team for their brilliant help in identifying key themes at this memorable conference.